Eisner Nominations for Kids and Teens

First of all, read this book, I beg you: 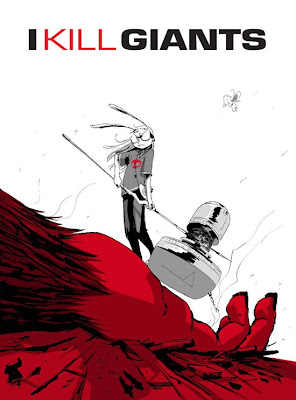 Second, the Eisner noms were announced--I'm a little late with this, but the winners won't be announced until July. Here are the kids and teens nominations (Bold titles are also on the 2010 GGNFT list):

Best Publication for Kids Best Publication for TeensThe children's and teens noms always seem very European to me, though I would not consent to explain that if you asked me. In particular, I think the TOON collection is more an object for enthusiasts than anything intended for children. However, I don't really care about anything except that I Kill Giants is one of the best books I read last year. In fact, I talked about I Kill Giants in one of the PCL newsletters not long ago. I cried, people. Cried.

Elsewhere on the lists, BOOM! studio's The Muppets got a shout-out, as did a few others from the GGNFT list: Pluto, Bayou, the Color Trilogy. My mommy is in America and she met Buffalo Bill seemed to appear in half the categories. I know it sounds like a kid's book, but the reviews all say, "Do not be fooled by the 5-year-old narrator! This is not a child's book!"

So there are some new-to-me titles on the list that I'll be investigating, et tu? Perhaps you would like to nominate some for the 2011 GGNFT list? Pretty please?
Posted by xemilyx at 1:55 PM