Singing your way through storytime 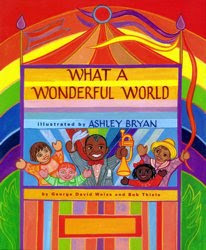 Have you ever sung a story to children? I have a 0-to-3-year-old story time with lots of pep, and it's hard to read a story to them without having at least a few of them run around making truck noises. There's also one who yells the last word I read on each page after I read it. But I kind of enjoy that. So one trick that I'm trying not to overuse is singing a story. I have a few books that are actually illustrations of songs, and whenever I read them, I sing each line. And it is pin drop silent.

It's really magic, and I'm a little afraid I just jinxed it by writing about it. But it has yet not to work, and it's a chance to showcase some books that are really the illustrator's show. And I don't think you need much musical ability to do it. I do a sort of whispery singing with long pauses between lines. It's a lullaby thing.

The books, after the jump.

What a Wonderful World. ill. Ashley Bryan. I did this for Earth Day, too. This song is so cinematic, but it works surprisingly well with children because of the simple language. And the illustrations on this one are so bright and beautiful that I often recommend it when teachers and others are looking for "multicultural titles." The illustrations also make me want to do puppet theater. 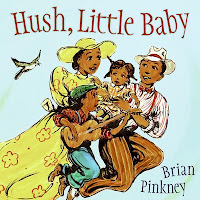 Hush Little Baby. ill. Brian Pinkney. Yay for daddy books! The mom's out running errands in this one, and that's not the only twist: the whole thing is set in the dusty rural 1900s, big brother strums the guitar, and daddy offers to give his baby a fire truck! Of course, you could also go with Marla Frazee's version of this song--or contrast the two!

The Wheels on the Bus. ill. Paul O'Zelinsky. This is kind of silly for the lullaby treatment, but somehow on a rainy day in the city, it works. This version has pop-ups, too, so actually, I find it a little hard to operate them at the same time as I am singing, but the shiny moving parts are sure to fascinate even the most restless little ones.

All the Pretty Little Horses. Ill. Linda Saport. Sad songs are the most beautiful, don't you think? I always wondered why this song sounded so sad, and I always imagined it was Irish. But when I discovered this version in my collection, I learned that the song is from the American south. I wish the illustrations had as beautiful of horses as the ones in Fritz and the Beautiful Horses, which I adored as a child, but I still love this book.

Inch by Inch. ill. Ora Eitan. I just realized that I should absolutely re-watch Hans Christian Anderson with Danny Kaye. Probably children today would scoff, but I adored that movie! You should go watch the trailer right now. This song is works so well with the classic storytime themes of counting and springtime.

There was an Old Lady Who Swallowed a Fly. There are so many versions of this one. I just ordered a wacky version that I saw in the issue of GOOP that Elizabeth Bird and Julia Rothman contributed to. This is too silly to do as a lullaby, so it usually turns into more of a sing-a-long, and I wonder if some of the parents are uncomfortable with their children singing, "perhaps she'll die," but it's awfully funny.

Oh, and there's a video related to the aforementioned wacky version:

And, honestly, I don't do He's Got the Whole World in His Hands, ill. Kadir Nelson, or This Little Light of Mine, ill. E.B. Lewis, because they reflect a particular religious background, but I think they're gorgeous. I would like to do them in a story time where I read books that reflect a couple different religious experiences. Possibly. Are there others?
Posted by xemilyx at 9:00 AM