Usurper of the Sun (Sort of) Book Review 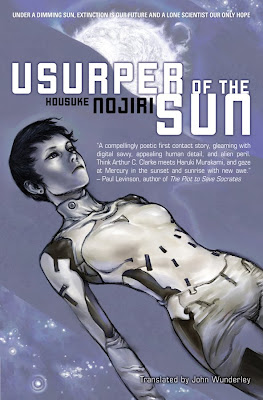 OK, probably sort of because it's hard sci-fi. But I don't have a tiny brain, really. I think the questions the novel raises are interesting. For example: If you were going to try to communicate to aliens the concept of friendship, how would you do it? Forget about the technical aspects of sending out messages into the unknown. What images would you use? What if the aliens don't eat together? What if they don't communicate verbally? What if they don't use physical touch to show affection? What if they're like ants or microorganisms and their relationships aren't based on feelings? Tricky, huh?

So I learned a new word: Xenopsychology. Alien psychology.

But the book disappointed me in a way that has nothing to do with the genre or the quality of the writing. This was the first Haikasoru book that arrived, fully cataloged, at my library, and I was hoping it would appeal to teens. The blurb goes thus:

Aki Shiraishi is a high school student working in the astronomy club and one of the few witnesses to an amazing event—someone is building a tower on the planet Mercury. Soon, the Builders have constructed a ring around the sun, threatening the ecology of Earth with an immense shadow. Aki is inspired to pursue a career in science, and the truth. She must determine the purpose of the ring and the plans of its creators, as the survival of both species—humanity and the alien Builders—hangs in the balance.

You can understand why I thought it was going to focus on a teenager, right? But by chapter 2 Aki is all grown up. Which makes sense, because the novel is made up of what were originally three short stories. So the author had to move fast.

I'm sure there are some teens who will adore this--the same ones who like Arthur C. Clarke. And it pairs nicely with Orbital, a graphic novel that makes peace-keeping seem more badass than battling stuff out. But I won't be nominating it for the Alex Awards (I am determined to find something to nominate for the Alex Awards), because I don't think this will appeal to teens in any special, teen-friendly way.

I am still excited to read the other Haikasoru novels, and I refer you to these reviews of Usurper of the Sun, written by people who actually read the book: